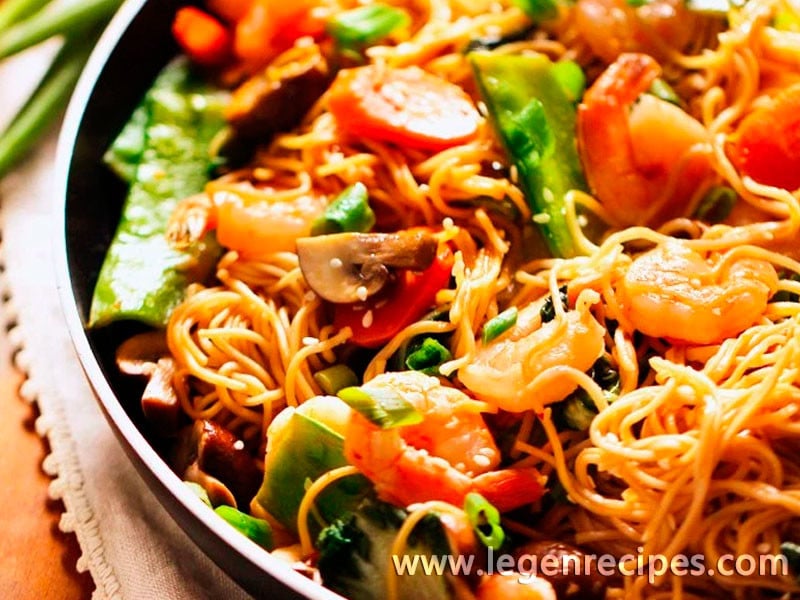 There’s a bevvy of insanely good take-out joints just a few blocks from my doorstep, so it’s hard not to indulge. Whenever a random craving suddenly hits, it’s 99% curable within a 10-minute radius of my house.

Spicy Szechuan green beans. Creamy  lamb korma with a 12-inch slab of naan. Thai coconut green curry with rice to sop it all up. Fresh sushi with a heaping side of gomae. Cheap and dirty pizza with thick crust. Gourmet pizza with thin crust. Southern cod fritters with beer served in mason jars. Perhaps a steaming hot bowl of pho.

This Shrimp Lo Mein not only comes together in about half and hour, but it’s full of veggies and packed with flavour. Plus, it’s a great alternative to getting Chinese take-out, which can quite often be overly salty.

Snow peas, carrots, mushrooms, bok choy, green onions, garlic, and shrimp make up the bulk of this dish, and it’s all tossed with a thick and flavourful sauce that coat the noodles and amps up the flavour.

Feel free to use this recipe as a baseline, and customize with whatever you have on hand. Instead of shrimp, use whatever leftover meat you have in the fridge. Have some extra veggies that are about to turn? Toss ’em in!

You can’t go wrong with this quick and easy weeknight meal.