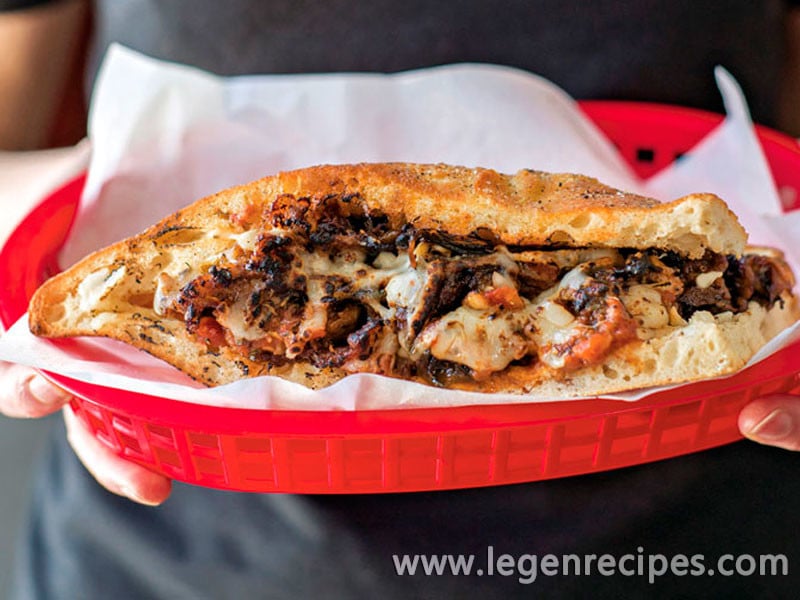 We’ve all been there (haven’t we??): a late night out that turns into an early morning out. Maybe a few beers were involved. Maybe not. Either way, it’s been a long time since dinner, and you’re suddenly ravenous. A slice of piping hot pizza was generally my go-to fourth (or maybe fifth) meal. Who knew putting an all-hours pizza joint smack in the middle of a nightlife zone was such a good business plan? Apparently a lot of people did, Fran.

Chef Kerry Altiero has an even better idea than pizza for filling your post-revelry belly. Altiero serves this aptly named Steak Bomb at his revered Cafe Miranda in Rockland, Maine, though presumably not in the wee morning hours. He does, however, offer up the recipe in his new book so you can make your own. With dishes like Hot. Dressed. Salad., 50 MPH Tomatoes, and Woo Tang Clam, Adventures in Comfort Food brings Altiero’s much-loved and wackily named dishes to those of us not lucky enough to live within striking distance of his home turf.

The Steak Bomb is not for Meatless Monday, nor for the faint of heart or obsessively neat. This is meaty, messy eating at its best.

“A good drippy, elbow-wetting, finger-licking, chin-shining, greasy, moist sandwich is a sensual pleasure,” Altiero says. “This is a sort-of-sub, and it has everything a sub needs, in my opinion: steak, peppers, mushrooms, onions, cheese. It’s especially perfect after a night out. This is not to be consumed behind the wheel. Officer, the olive oil . . .”